Yes, like everyone else who has read this series, I'm madly in love with all things Hunger Games! That means the books, the swag (I am dying to have a Mockingjay pin), and, perhaps most of all, the movie. I am dying to see it. I can't wait until 2012... I want it now! For the time being, we all have to sit tight and wait for pictures and trailers to be released, now that casting seems to be done. Ah yes, casting. The only definitive thing I think can be said about the casting is that it's not uniformly appreciated. Everyone has an opinion about it, including me, and since it has come up a few times, I thought I'd share my thoughts. 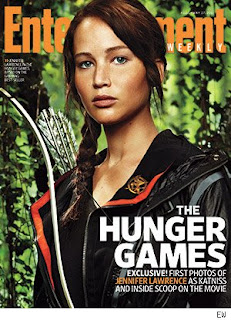 This Entertainment Weekly cover is what dragged me into the fan frenzy. I was resisting, I was trying to ignore all the talk about the movie because once I'm in, I'm in full-on fangirl mode. I saw a few of the casting choices and, honestly, I wasn't terribly pleased, which only helped me to ignore all the talk. Jennifer Lawrence as Katniss Everdeen, I thought, really?  She's so beautiful, so blonde, so... everything Katniss isn't.  Not that she's not attractive, but she's not glamorous. Jennifer Lawrence is glamorous! Bleh.

Then this cover came out and I swooned. Almost literally, swooned. I love it, I think they really captured the essence of who Katniss is. She looks just like that in my mind and seeing it on paper (well, the screen, really) I was completely drawn in. After that, it was almost impossible not to give in to my feelings about the rest of the casting, particularly that of Peeta and Gale. If you read my reviews, you know I loved them, and the whole love triangle thing. I live for love triangles! So, when I saw the casting for Peeta and Gale, I had seriously mixed feelings. 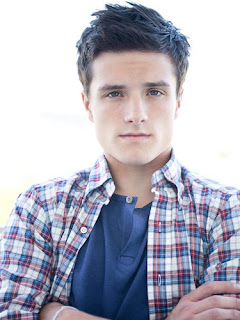 First, Peeta. There's no doubt that Josh Hutcherson is quite good looking. He's adorable, really, and every time I see his smile I just want to hug him. That reaction, I think, is why he was chosen for this role. It took me a while to realize that he was the bad vamp kid in the Cirque du Freak movie. But, his appearance is all wrong for Peeta as far as coloring. He's dark, both hair and eyes, but I'm trying to reserve serious judgement because I didn't think Jennifer Lawrence could pull of Katniss, either, and look how wrong I was on that call. I'm sure he'll make a great Peeta and, best of all, he can actually act. It's going to take monumental acting talent to pull off Peeta convincingly, especially considering that Peeta is so charismatic. I think he can do it and I don't think you have to strain your brain to guess which "team" I'm on here. I loved Peeta from the first, loved him, and I always rooted for him and Katniss. Always. 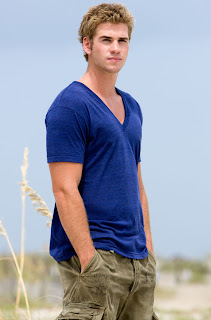 As for Gale, well, Liam Hemsworth is just gorgeous! Look at his eyes, he's crazy good looking (never mind that his older brother is Thor!).  I have zero problems with this casting. He looks just like I'd imagine Gale to look and I'm sure he'll pull it off. I've never seen him in anything, but even if he's a terrible actor it doesn't really matter all that much because Gale strikes me as the strong silent type. Still, I'm sure he'll be great. I have tremendous confidence in the pick.

As for all the others, I really like the rest of the casting, particularly Haymitch, Prim, and Rue. I think they really did a good job capturing the essence of all of the characters. I'll be interested to see how the movie comes together. More than the casting, I'm concerned about the script. It's going to take a genius script to do this book justice. I hope Hollywood's doesn't extend to casting and make-up and stop short of the script. If so, this will be the biggest disappointment ever. Until we know for sure, here's hoping that our faith is not misplaced.

Quick update to what I've said here. Check out this pic I found on HungerGamesMovie.org a few minutes ago. It's a fan-made pic of Josh Hutcherson as Peeta... 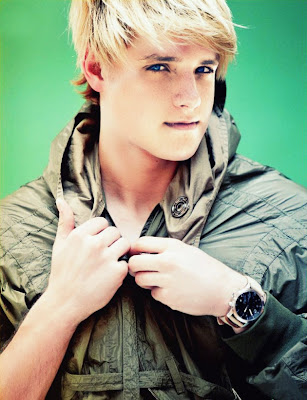 Goodbye doubt! If I had it before (and I did, really), this seals the deal. I know it's not official, but it helps to see what he may look like as a blond. Love it!